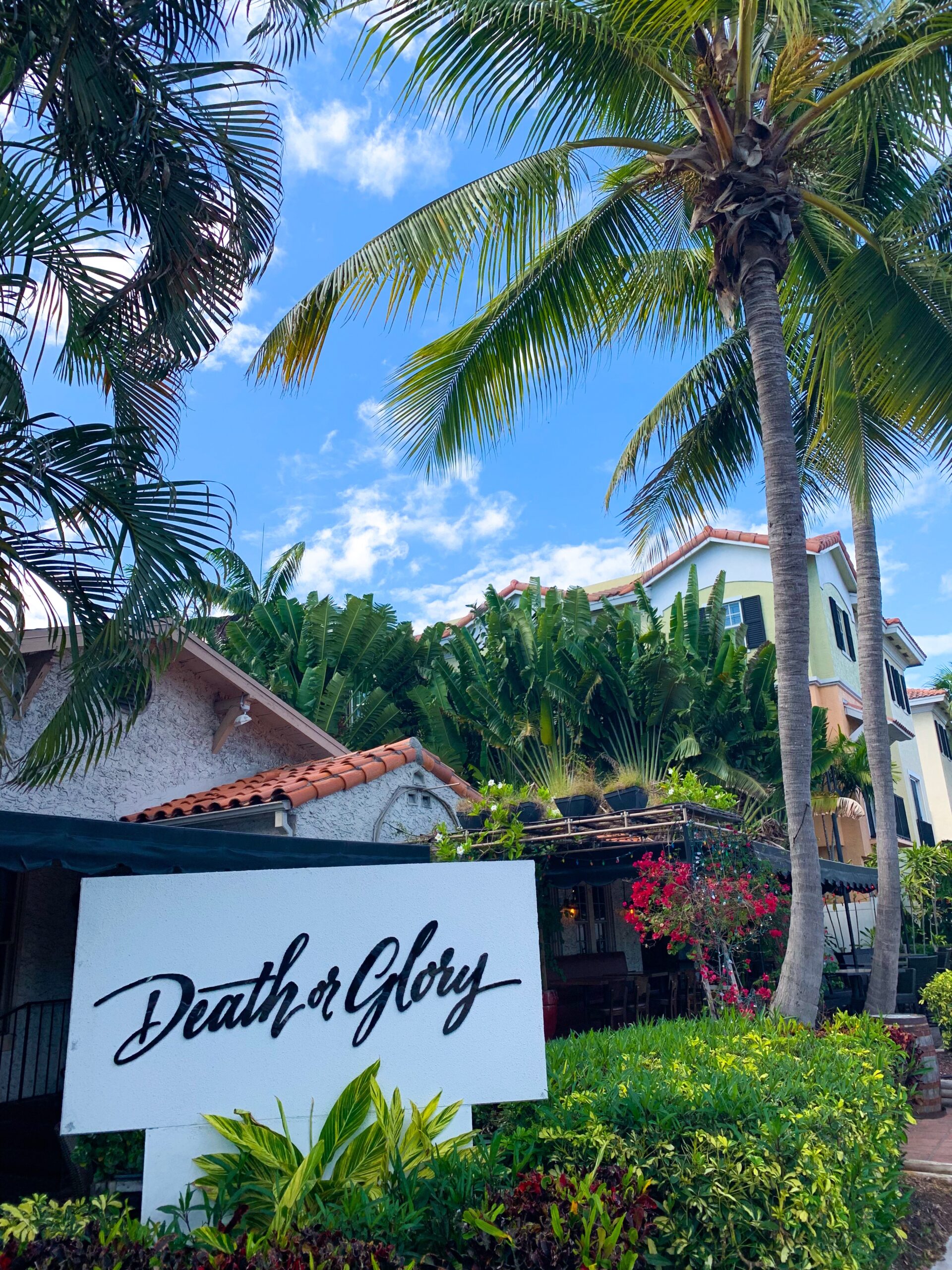 On a side street in Delray Beach there is a hidden Tiki oasis, tucked in a carport of a historical home built. Death or Glory is a young establishment with two years of business under its belt, but its building sitting at 116 NE 16th Avenue helped write the story of Delray Beach.

Death or Glory’s location was originally built in 1925 to the Hall Family. The Halls had purchased a large plot of waterfront in Delray after their arrival in 1919. This was the home of one of the first Floridian screenwriters, Emmett Campbell Hall. The Halls constructed the Delray Theatre that had the town’s first air conditioning system. The home was sold to the Falcon family in 1941 which operated as a pharmacy at this location. It is still known as The Falcon House, which also was the operating name for the bar that stood here.

The Falcon House was the homestead of Delray for saints, sinners and mostly drunks. It operated under several different names until it became Death or Glory in 2017. Death or Glory may be a new kid on the block in regard to years under its belt, but in addition to its iconic location, its ownership is surely to set it forth into becoming a bonafide classic to Palm Beach County.

Death or Glory is truly a local spot. It won the People’s Choice Award at the annual Savor the Avenue in April 2019. It also hosts the Miracle Holiday popup bar at its location and at Rosemary Square in West Palm Beach. It surprised everyone last October with a pop-up Halloween bar complete with a fortune teller, creepy cocktails and spooky photo opportunities.

After skirting past the branching bougainvillea Death or Glory’s patio, you escape the light to find a dim bar with a tropical setting. The bar glows by a neon sign reading “STOP MAKING SENSE” on a faux living wall. It’s a tiny tribute to Tiki Bar Culture in Palm Beach County.

The type of Tiki Bar I am referring to is reminiscent of the Polynesian inspired Southern California cocktail bars that boomed in popularity post World War II. In reality, Polynesian Pop Culture is a conglomeration of South Pacific and Asian cultural appropriation in the most non-offensive way. World War II and Pearl Harbor attributed to the widespread popularity of Tiki cocktails. Many original Tiki Bars have phased out with time, with a few legends still standing like the Mai Kai in Ft. Lauderdale.

Owner Ayme Harris is no novice to the Tiki scene. Her first Polynesian Project was the former Kreepy Tiki bar in Lauderdale. Ayme has made a name for herself among those clad in Aloha Print and represented the area in 2019’s “Women Who Tiki” at The Hukilau.

To nod to at Delray’s history, the inside is antique laden with memoirs of the Prohibition Era. This slice of South Florida was central to rum running. At the turn of the 20th century, it was common to find a rum barrel washed ashore in Delray Beach.

Off the cocktail menu, I tried both the Passion of Barbados and the Stiggin’s Fancy, which is truly my favorite cocktail I have found in Palm Beach County. I am very particular on cocktails, they must be tart, slightly sweet, light and carbonated. The Stiggin’s Fancy hits all bars for me, especially since the tartness comes from pineapple, my favorite fruit and decoration. The Passion of Barbados is a classic, served in a rum barrel which should have “one and done” embossed on the side. It is tasty but be warned: call an Uber home.

Bring home Death or Glory’s signature mug as a souvenir from your visit. It is a sculpture of skull with a falcon resting on its head. It sits on the proverbial shelf far above the draft pints you stole from sports pubs in college. It is a collector’s piece, hand-built by Tiki Diablo.

Death or Glory is a bold concept of mixing Prohibition with Polynesia, only making the Clash’s 1979 hit a perfect name for it.

Casual Attire, leave the kids at home, dogs welcome on the porch.

Finish the caption! 💬 The most bananas 🍌 thi

All aboard for #FloridaFunFact Friday! The histori

There must be a super bougie clown walking around

I teamed up with @sahara_rose_skincare to help bri

If you’re a sponge for information 🧽 + love F

It may be Monday, but make it sunny, Little Honey.