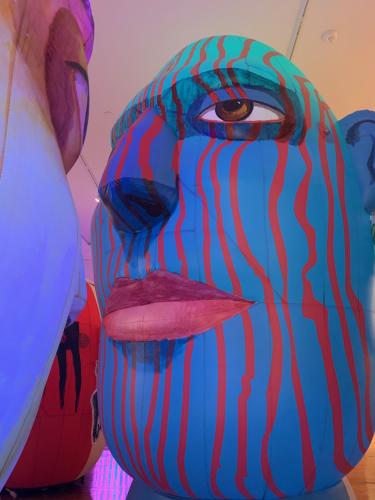 It is MOSAIC month in the Palm Beaches, which stands for Month of Shows, Ideas, Art,  and Culture. For the second year, I have kicked off MOSAIC with a visit to the Cornell Art Museum in Delray Beach. The newest exhibit on display is The Seven Solos, with seven unique interactive art installations.

It is an immersive experience, appealing to all ages to touch, view, and listen to art. Melanie Johanson, the museum’s curator since 2014, drew her curation inspiration for The Seven Solos from the hanging garden at last year’s Flora exhibit. I can attest that twirling in last season’s swinging daisies were joyful. This year, the installations are illuminating, in both mind and spirit.

The first of The Seven Solos to greet you is crafted imagination of Miami-based artist, Alex Trimino. Her installation, Luminara, is a combination of textiles and fibers illuminated by neon lights. The old-world craft of needlework combines with modern neon lights. Her largest piece extends up through the central foyer of the Cornell, with ever-changing views from varying heights and angles. This central piece is the compass for the Seven Solos; as you exit each installation, the glow of Trimino’s work will lead you to the next.

The second solo I explored was the work of Miya Ando, entitled Waves Becoming Light. Ando, is a practicing Buddhist with her work inspired by a quote by Zen Monk Eisei Dõgen:

“[Being illuminated by] the moon dwelling in the quiet mind, even the waves are breaking down and becoming light.”

This quote it is translated with shimmering, sheer indigo tapestries draped in the centrally allowing light to pass through. Her metallic work of Full Moon and New Moon is displayed on parallel walls. As I stood directly in front of New Moon, I gathered my reflection along with the mirrored image of Full Moon sitting over my head like a halo. Just as the quote entailed, the moon was dwelling in my quiet mind.

The third solo, Heaven and Earth: Land 2019 by Shinduk Kang is cohesive with the work of Ando. Kang created an interactive display of translucent fabric with colors of royalty in Korean tradition. This solo is intended to transcend you into a space that is limitless and bright inspired by history of the Cornell Arts Museum. The room of Kang’s art served as an elementary school classroom in the early 1900s. As I meandered through, it uncovered a buried memory of my own elementary school experience: the Playground Parachute. If your unfamiliar with the 1990s physical education phenomena, it is a kinesthetic exercise for children to move a parachute in unison with their classmates. Kang’s color selection was in the same hues as my reminiscence, bright primary colors with light seeping through.

The fourth solo I encountered was The Janis Project by Frank Hyder. The room is occupied with giant heads, irradiated with technicolor light and patterns. It reminded me of the Moais of Easter Island if they were attending a rave. Hyder’s work is inspired by the Janus, the Roman God of new beginnings. The inception of The Janis Project was the artist’s reaction to racial concerns in which he unified the two heads of the Janus with different skin colors. Hyder’s intention is to welcome patrons to engage in new experiences, welcome different cultures, and thus, new beginnings.

The fifth solo I met was To Hold, a Time, Your Eyes, Forever. The artist, Jacob M Fischer, pretty much nailed it with the title. This room grasps your gaze for more than moments, and welcomes you to loiter among the cushions on the floor. Patterns of colored cord are strung from the ceiling, with a light installation bouncing off of the fibers. The walls are covered in foil work, for extended play on light for a prism-like effect of refraction. During my visit, a group of ladies had occupied some key cushions for some time, while one of them was unraveling her realizations of her past relationships and what she wanted to pursue in life. It’s a magic space, where you can spend a time just stargazing in Fischer’s creation, or  perhaps experience a personal revelation.

To Hold, A Time, Your Eyes, Forever

Onto the sixth solo, was the work of Brookhart Jonquil whose medium is fluorescent light and glass. His work, Saturn Rings the Sunrise Bells, is inspired by mathematics, Platonic idealism, and a utopian architecture, which is a concept I had to Google. Utopian architecture is creating visionary, and often impractical structures on paper for a perfect society. Brookhart’s work is just as paradoxical, with light reflecting off the mirror you expect to see your own reflection but cannot. I personally was perplexed by this as I tried to get a mirror selfie unsuccessfully, for an undisclosed amount of time. Brookhart uses one-way glass to exclude reflections of the outside in his world of euphoric light. With perfect planes of symmetry, his artwork hit my Fibonacci obsession hard.

The final solo I experienced was Ebb and Flow, a collaboration between Gianna Dwinn and Freddy Jouwayed. A salt formation of tiny swells meets rolling waves of light, and a projection of cityscapes. It is their interpretation of the anthropogenic effects on our planet, primarily climate change. To me, the title draws on the ripple effect of humans on the planet figuratively. The literal translation of the title is in its wave design, since climate change causes the flow of sea levels rising.

If you are seeking an exhilarating date, a rainy-day plan, or prefer to become cultured, I highly encourage you to go to this exhibit through October. During MOSAIC, enjoy free admission for two during the whole month of May.

Get illuminated, my friends! And as always, live global and stay local.

To the artists of #TheSevenSolos for their amazing creations and Melanie Johanson for curating this collection. You can find them on Instagram:

A special thanks to Palm Beach Culture and Discover the Palm Beaches for the coordination and hard work put into MOSAIC.

This post is sponsored by the Cornell Art Museum.

When you find a shirt that seriously speaks to you

Monday Blues + this rainy day 🌧 have me craving

If you look for it, you can still see the Magic in

I found the sweater that can handle both fall + ho

FLOventure ready with my @yeti 🍊 💦. I stoppe